Words don’t make a photograph, but we’ve compiled a collection of wise words told by great photographers, writers, artists and entrepreneurs. We hope these photography quotes inspire and motivate you to create beautiful photographs.

Contents hide
1 Like it? Pin it!
2 100 Best Photography Quotes of All Time 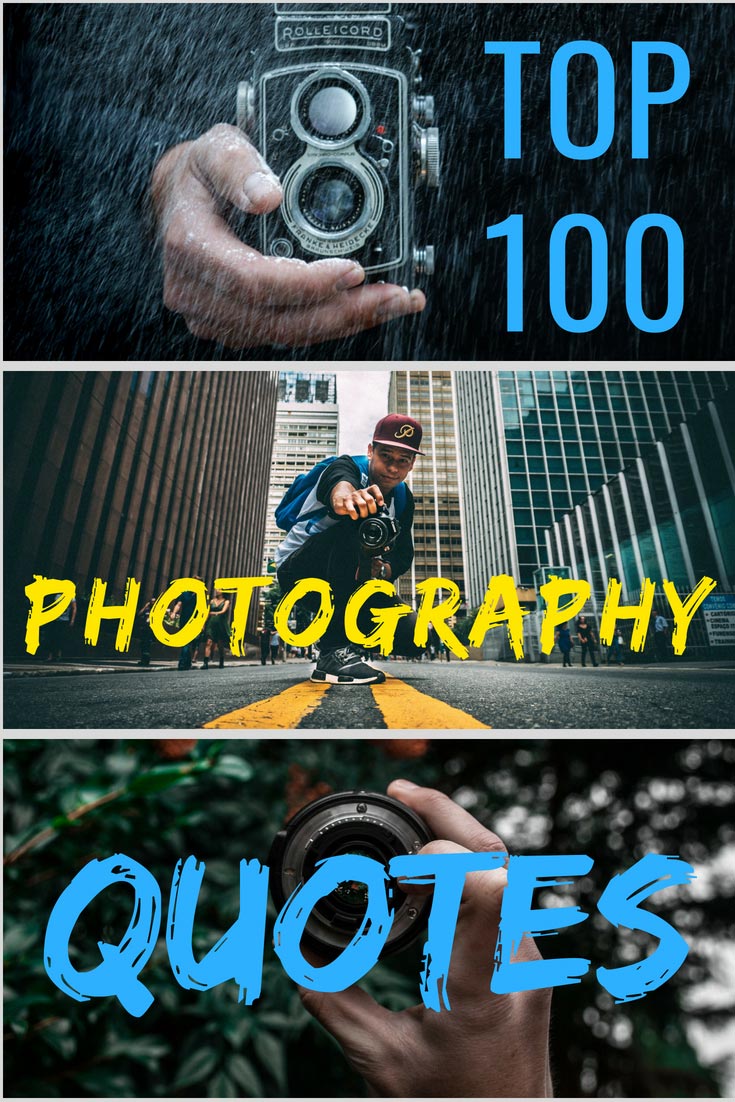 1. “Skill in photography is acquired by practice and not by purchase.” ― Percy W. Harris

2. “The biggest cliche in photography is sunrise and sunset.” ― Catherine Opie

3. “I fell in love with the process of taking pictures, with wandering around finding things. To me it feels like a kind of performance. The picture is a document of that performance.” ― Alec Soth

4. “The whole nature of photography has changed with the advent of a camera in everybody’s hand. ― Sally Mann

5. “If you want to be a better photographer, stand in front of more interesting stuff.” ― Jim Richardson

6. “Black and white are the colors of photography. To me they symbolize the alternatives of hope and despair to which mankind is forever subjected.” ― Robert Frank

7. “If I have any ‘message’ worth giving to a beginner it is that there are no shortcuts in photography.” ― Edward Weston

8. “What I like about photographs is that they capture a moment that’s gone forever, impossible to reproduce.” ― Karl Lagerfeld 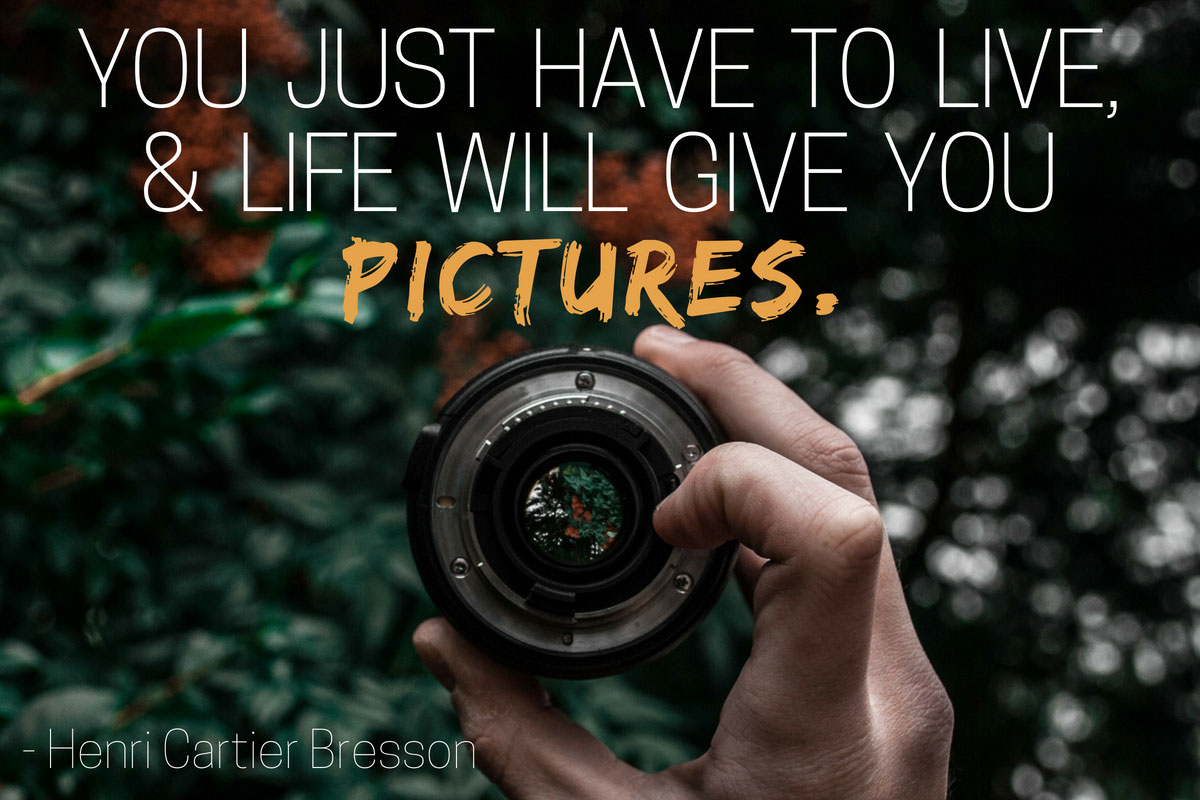 9. “I am not interested in rules or conventions. Photography is not a sport.” ― Bill Brandt

10. “If I saw something in my viewfinder that looked familiar to me, I would do something to shake it up.” ― Garry Winogrand

11. “When words become unclear, I shall focus with photographs. When images become inadequate, I shall be content with silence.” ― Ansel Adams

12. “Photography is a way of feeling, of touching, of loving. What you have caught on film is captured forever. It remembers little things, long after you have forgotten everything.” ― Aaron Siskind

13. “Which of my photographs is my favorite? The one I’m going to take tomorrow.” ― Imogen Cunningham

14. “I found that photography was a great way of relaxing on the set.” ― Jeff Bridges

16. “Anyone can shoot chaos. But the most perceptive photographers can make compelling pictures out of uninteresting moments.” ― Alex Tehrani 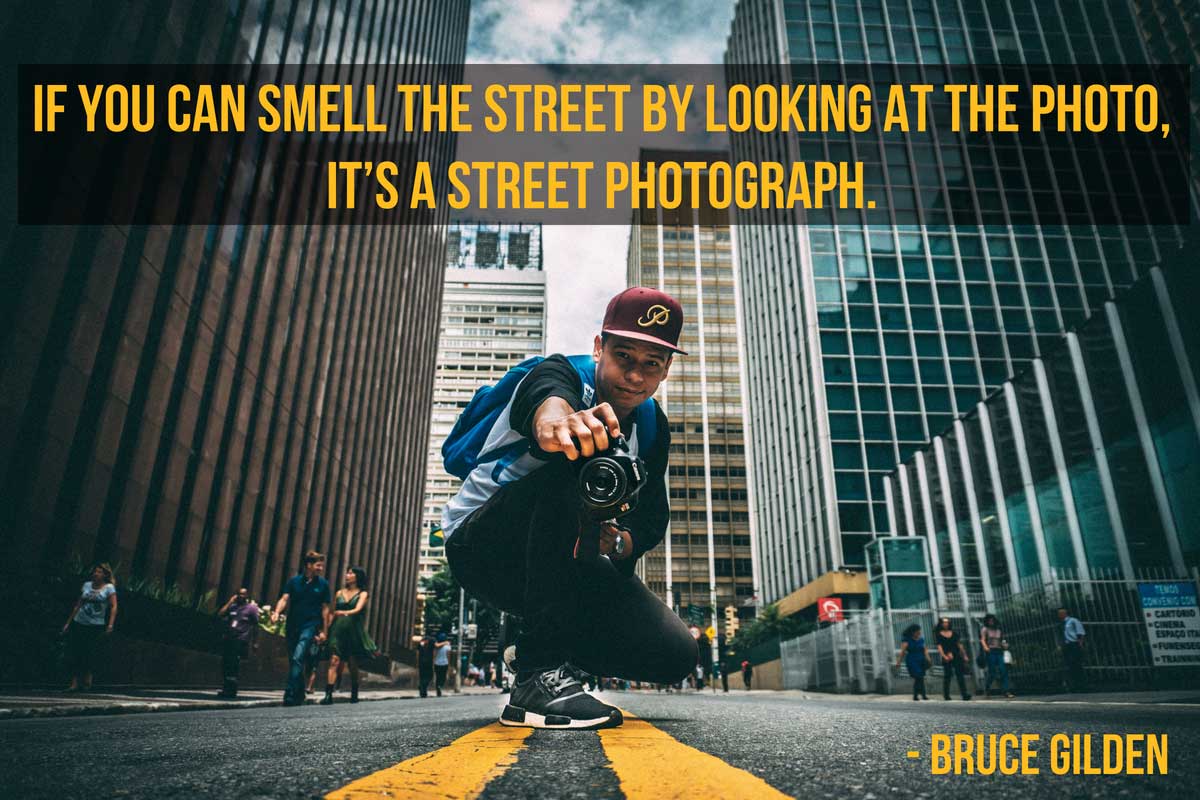 17. “The camera adds a certain sheen to things. Something about being frozen in time really makes things sparkle.” ― Brandon Stanton

18. “The camera is an excuse to be someplace you otherwise don’t belong. It gives me both a point of connection and a point of separation.” ― Susan Meiselas

19. “A thing that you see in my pictures is that I was not afraid to fall in love with these people.” ― Annie Leibovitz

20. “Quit trying to find beautiful objects to photograph. Find the ordinary objects so you can transform it by photographing it.” ― Morley Baer

21. “I tend to think of the act of photographing, generally speaking, as an adventure. My favorite thing is to go where I’ve never been.” ― Diane Arbus

22. “A good photograph is one that communicates a fact, touches the heart and leaves the viewer a changed person for having seen it. It is, in a word, effective.” ― Irving Penn

23. “A picture is worth a thousand words.” ― Arthur Brisbane

24. “Allow yourself the freedom to step away from perfection because it is only then that you can find success.” ― Chase Jarvis 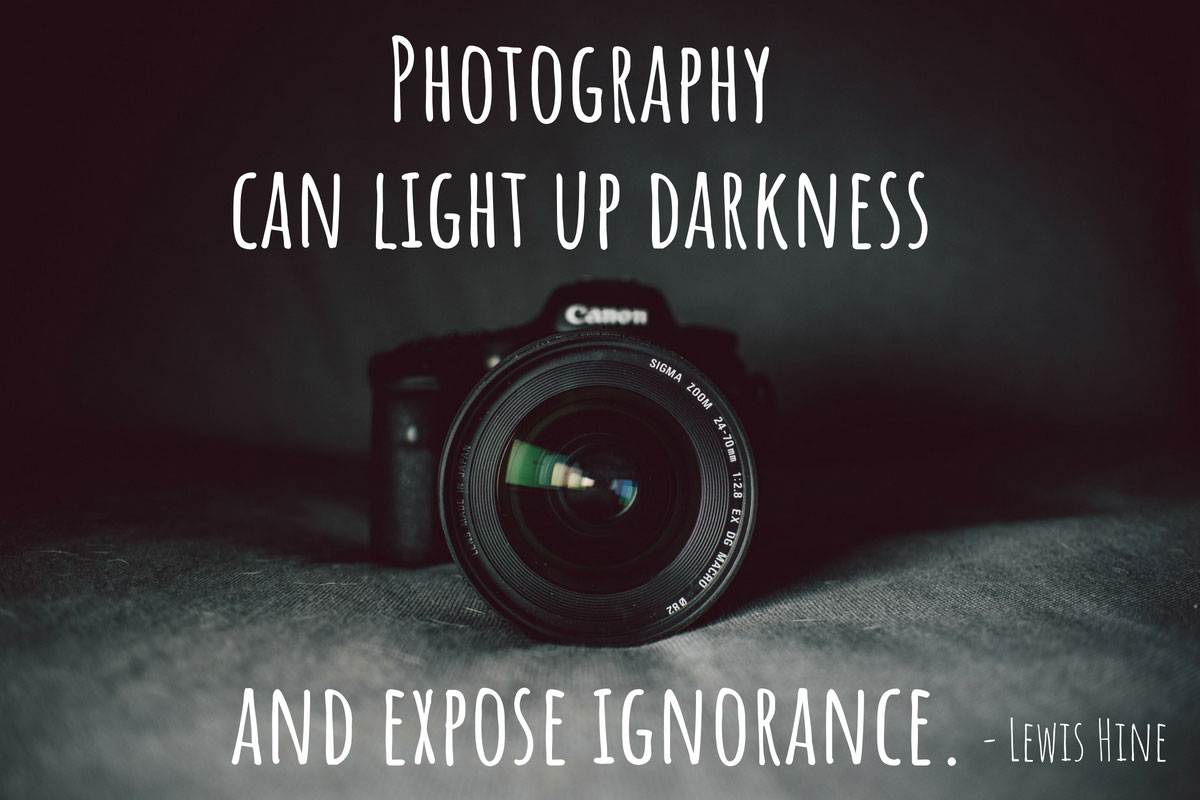 25. “Taking pictures is savoring life intensely, every hundredth of a second.” ― Marc Riboud

27. “The best thing about a picture is that it never changes, even when the people in it do.” ― Andy Warhol

28. “We are making photographs to understand what our lives mean to us.” ― Ralph Hattersley

29. “There is one thing the photograph must contain, the humanity of the moment.” ― Robert Frank

30. “You just have to live and life will give you pictures.” ― Henri Cartier Bresson

31. “Where light and shadow fall on your subject – that is the essence of expression and art through photography.” ― Scott Bourne

32. “There will be times when you will be in the field without a camera. And, you will see the most glorious sunset or the most beautiful scene that you have ever witnessed. Don’t be bitter because you can’t record it. Sit down, drink it in, and enjoy it for what it is!” ― DeGriff 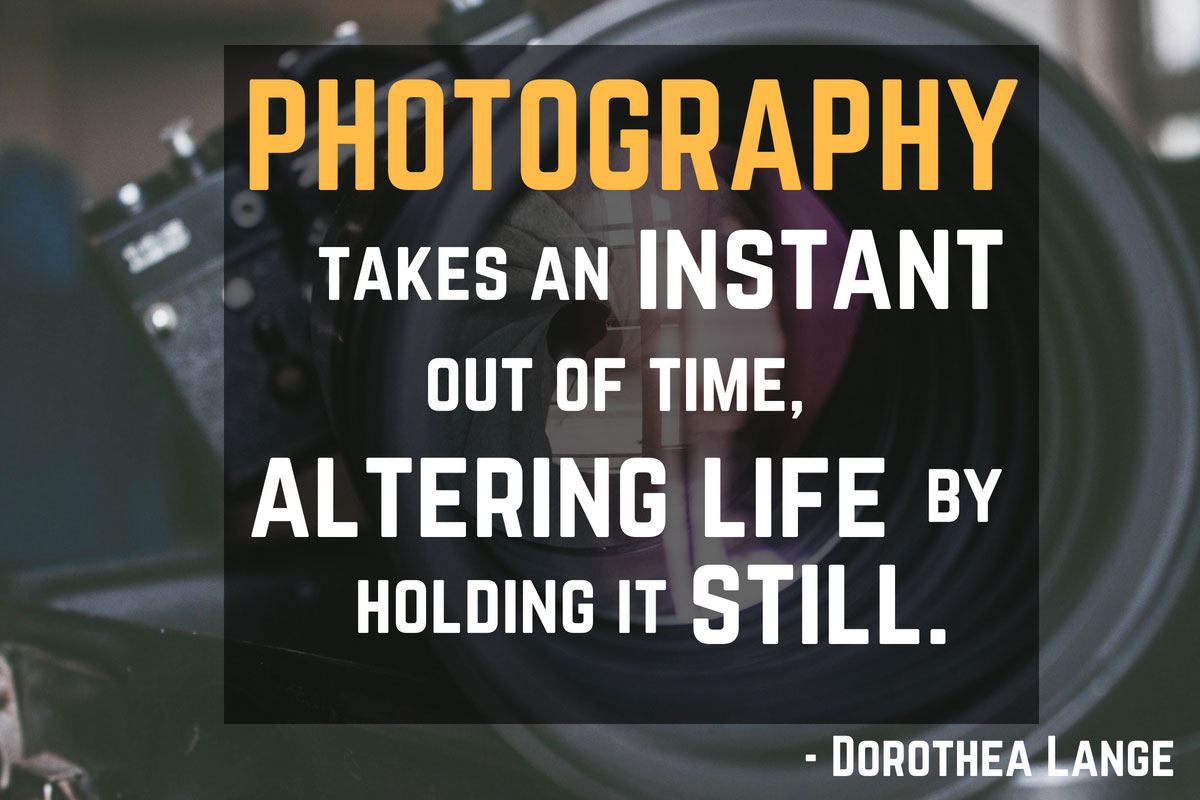 Read more articles on the blog:

33. “Anything more than 500 yards from the car just isn’t photogenic.” ― Edward Weston

34. “A good photograph is knowing where to stand.” ― Ansel Adams

35. “Photography takes an instant out of time, altering life by holding it still.” ― Dorothea Lange

36. “To consult the rules of composition before making a picture is a little like consulting the law of gravitation before going for a walk.” ― Edward Weston

37. “Photography can light up darkness and expose ignorance.” ― Lewis Hine

38. “What I have learnt and what I teach now is all about experimentation and learning to pick yourself up and try again when you fall down.” ― Lara Jade

39. “Sometimes I do get to places just when God’s ready to have somebody click the shutter.” ― Ansel Adams

40. “I like to photograph anyone before they know what their best angles are.” ― Ellen Von Unwerth 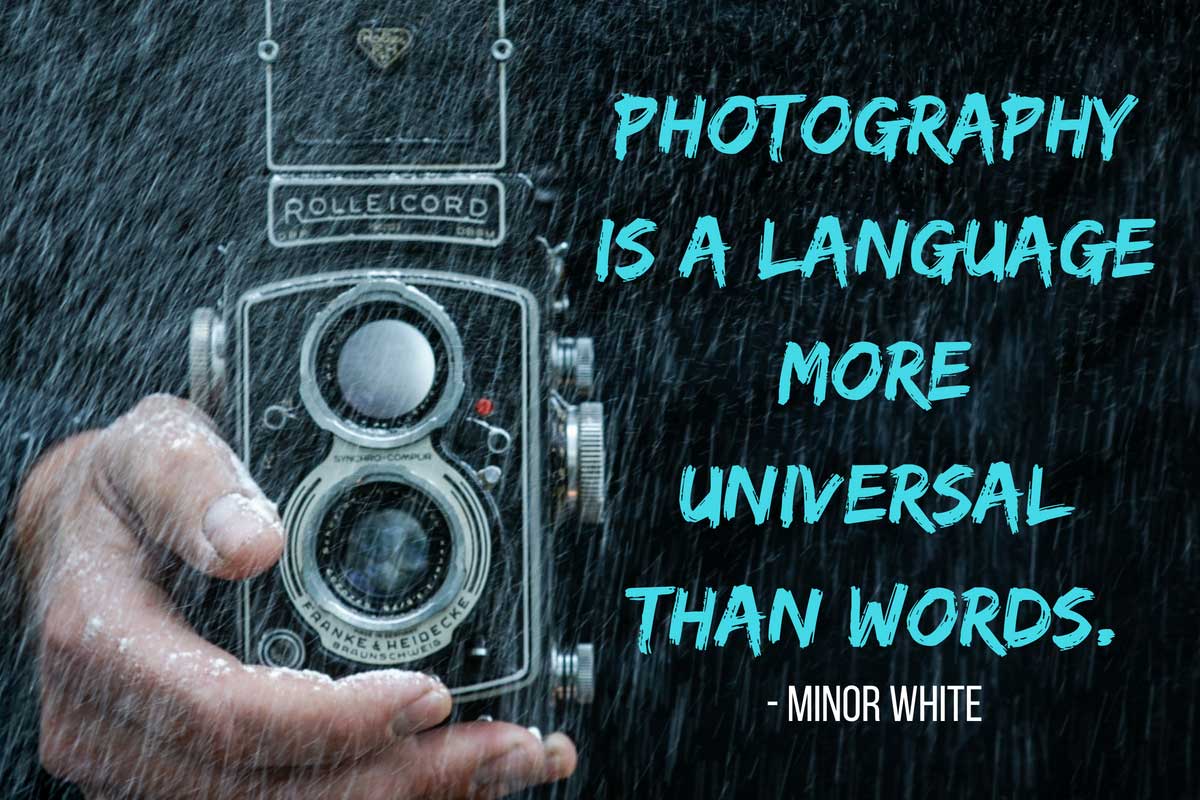 41. “Creativity needs to extend beyond the lens. Find creative ways to showcase your work and get it seen. Straight up tenacity, hard work and determination will always be part of the equation, so get to it.” ― Jimmy Chin

42. “There is only you and your camera. The limitations in your photography are in yourself, for what we see is what we are.” ― Ernst Haas

43. “If a photographer cares about the people before the lens and is compassionate, much is given. It is the photographer, not the camera, that is the instrument.” ― Eve Arnold

45. “I am forever chasing light. Light turns the ordinary into the magical.” ― Trent Parke

46. “My life is shaped by the urgent need to wander and observe, and my camera is my passport.” ― Steve McCurry

47. “Photography imitates everything and expresses nothing.” ― Honoré Daumier

48. “To me, photography is the simultaneous recognition in a fraction of a second of the significance of an event.” ― Henri Cartier-Bresson 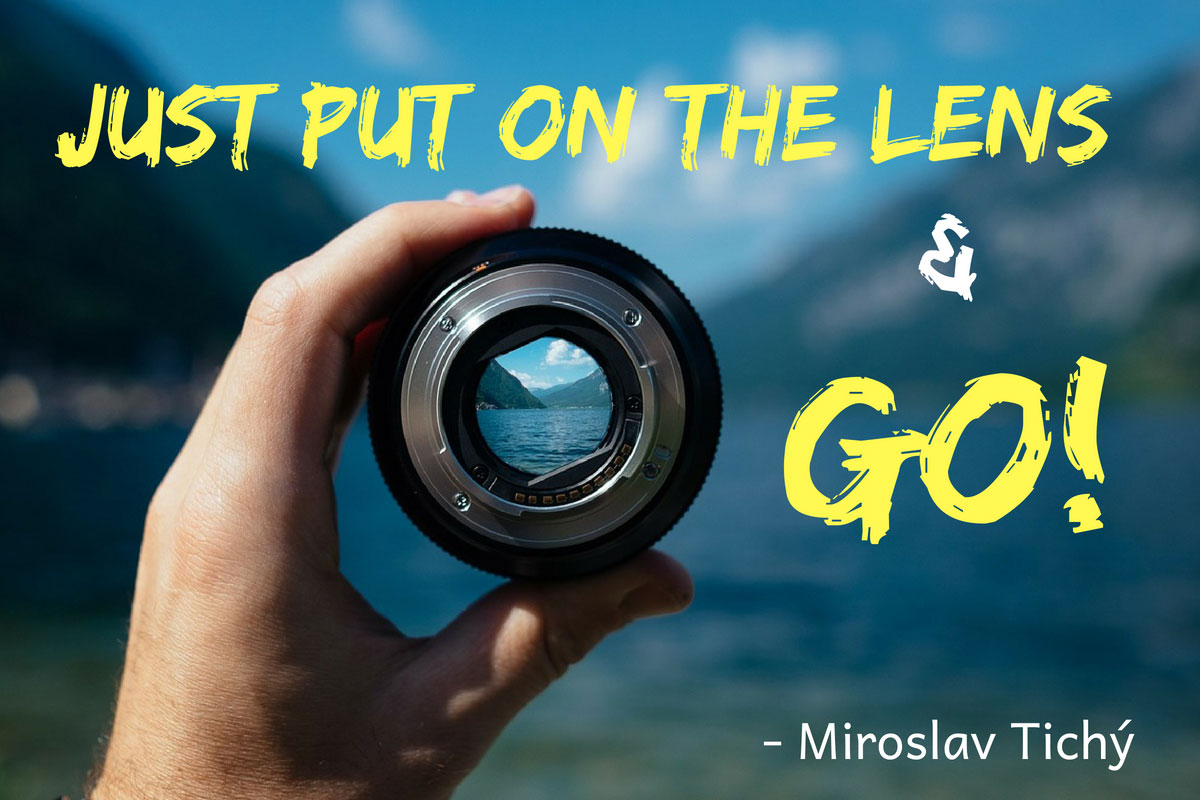 49. “Don’t pack up your camera until you’ve left the location.” ― Joe McNally

50. “The more pictures you see, the better you are as a photographer.” ― Robert Mapplethorpe

51. “Photography to me is catching a moment which is passing, and which is true. ― Jacques-Henri Lartigue

52. “As much as I love music, in my mind, photography is what makes me the happiest – that’s for sure.” ― Julian Lennon

53. “Photography is a language more universal than words.” ― Minor White

54. “Every viewer is going to get a different thing. That’s the thing about painting, photography, cinema.” ― David Lynch

55. “Photography is about finding out what can happen in the frame. When you put four edges around some facts, you change those facts.” ― Garry Winogrand

56. “I treat the photograph as a work of great complexity in which you can find drama. Add to that a careful composition of landscapes, live photography, the right music and interviews with people, and it becomes a style.” ― Ken Burns 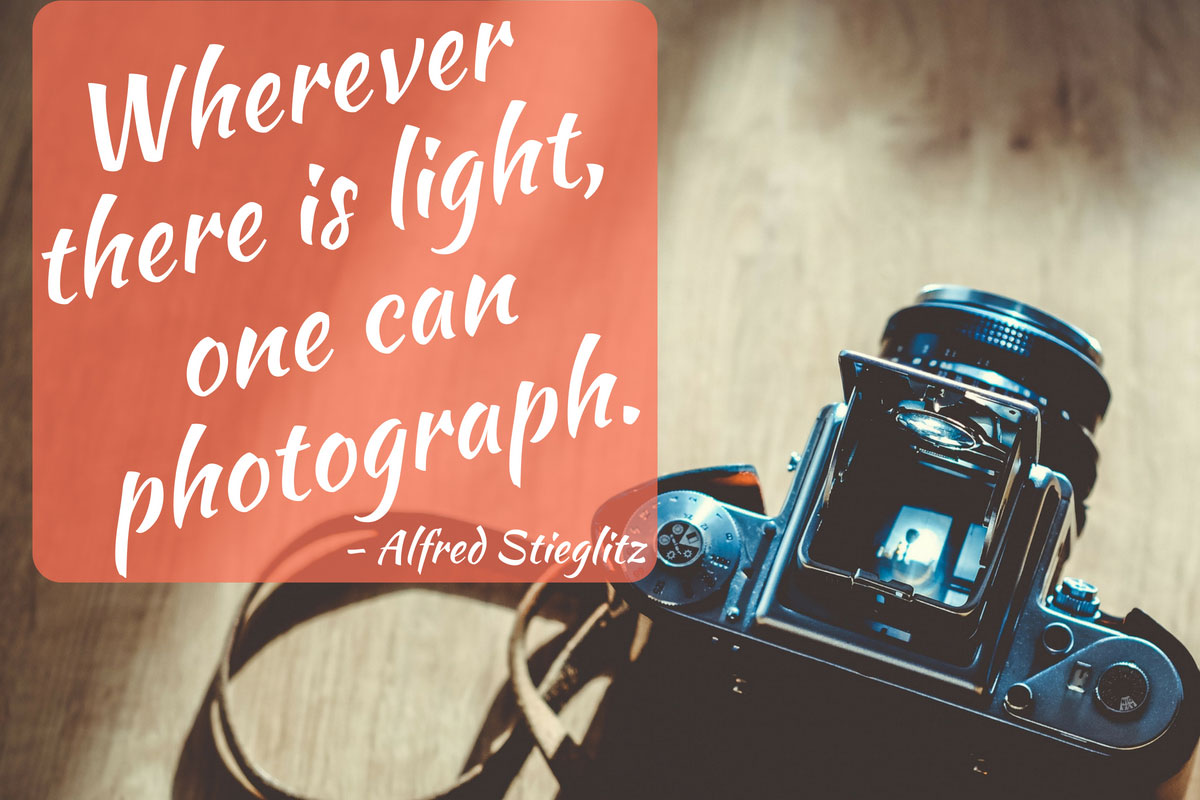 57. “Photography is for me, a spontaneous impulse that comes from an ever-attentive eye, which captures the moment and its eternity.” ― Henri Cartier Bresson

58. “Wherever there is light, one can photograph.” ― Alfred Stieglitz

59. “Twelve significant photographs in one year is a good crop.” ― Ansel Adams

60. “There is a vast difference between taking a picture and making a photograph.” ― Robert Heinecken

61. “Photographs open doors into the past, but they also allow a look into the future.” ― Sally Mann

62. “As I have practiced it, photography produces pleasure by simplicity. I see something special and show it to the camera. A picture is produced. The moment is held until someone sees it. Then it is theirs.” ― Sam Abell

63. “I think good dreaming is what leads to good photographs.” ― Wayne Miller

64. “If you can smell the street by looking at the photo, it’s a street photograph.” ― Bruce Gilden 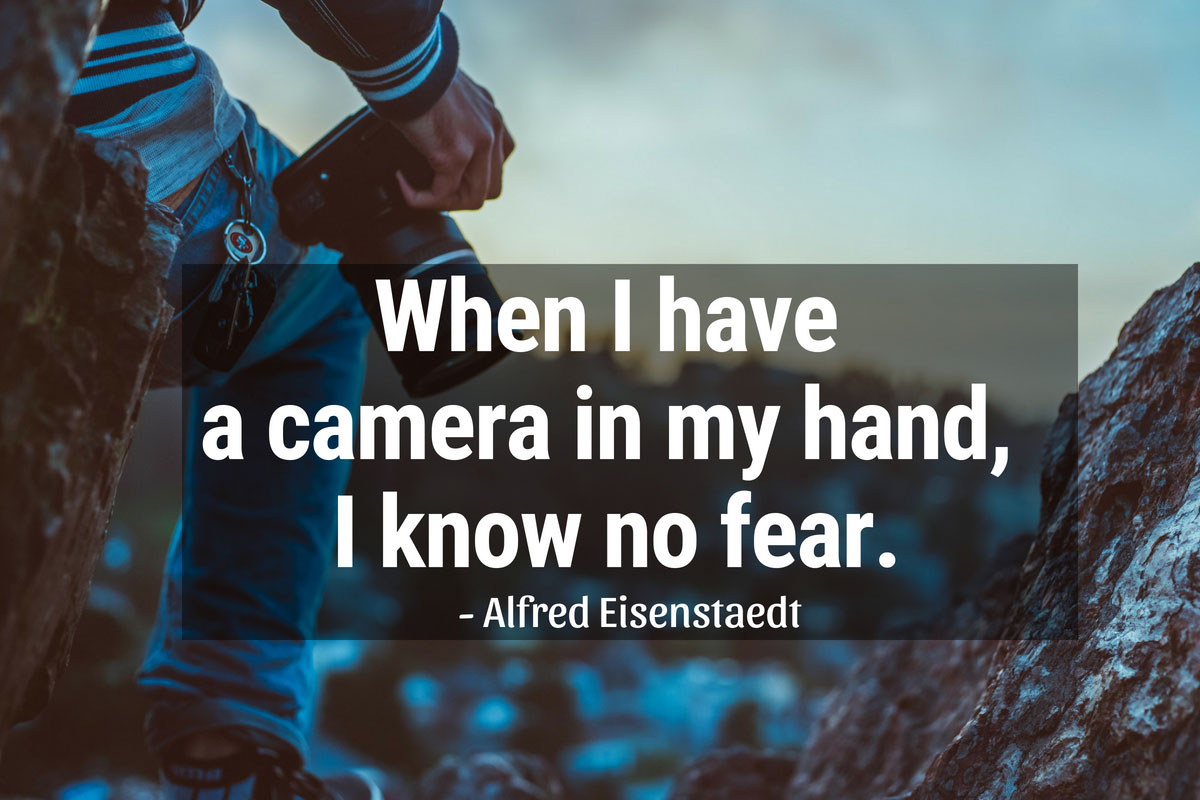 Read more articles on the blog:

65. “I went into photography because it seemed like the perfect vehicle for commenting on the madness of today’s existence.” ― Robert Mapplethorpe

67. “Photography can never grow up if it imitates some other medium. It has to walk alone; it has to be itself.” ― Berenice Abbott

69. “I always thought of photography as a naughty thing to do – that was one of my favorite things about it, and when I first did it, I felt very perverse.” ― Diane Arbus

70. “I think all art is about control – the encounter between control and the uncontrollable.” ― Richard Avedon

72. “Photography is a small voice, at best, but sometimes one photograph, or a group of them, can lure our sense of awareness.” ― W. Eugene Smith 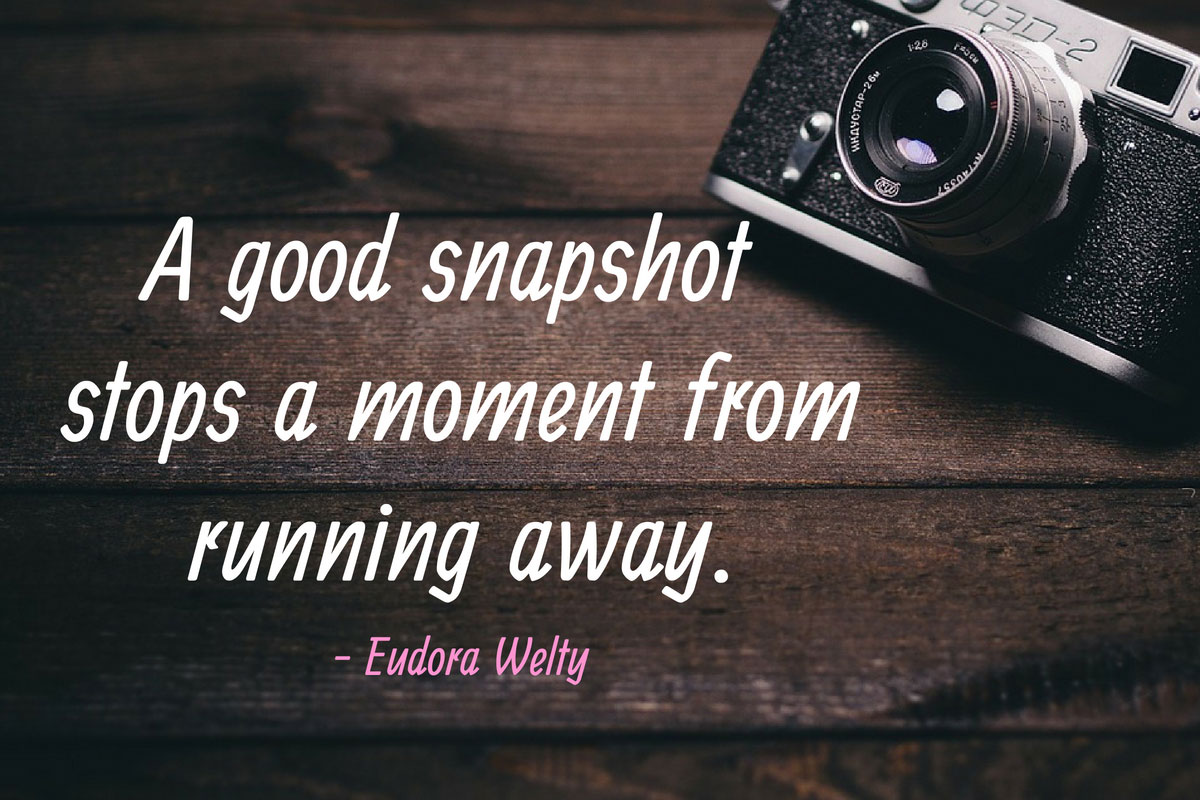 73. “I don’t think there’s any such thing as teaching people photography, other than influencing them a little. People have to be their own learners. They have to have a certain talent.” ― Imogen Cunningham

74. “I’ve always had a passion for technology, photography, startups, and connecting people. Bringing those aspects together made me successful.”― Kevin Systrom

75. “What it all boils down to for me is having the enthusiasm to do something for enjoyment and being stimulated by what’s around you. That’s what photography does for me.”― Graeme Le Saux

77. “Photograph the world as it is. Nothing’s more interesting than reality.” ― Mary Ellen Mark

78. “Light makes photography. Embrace light. Admire it. Love it. But above all, know light. Know it for all you are worth, and you will know the key to photography.” ― George Eastman

79. “Photography is about finding things. And painting is different – it’s about making something.” ― Saul Leiter 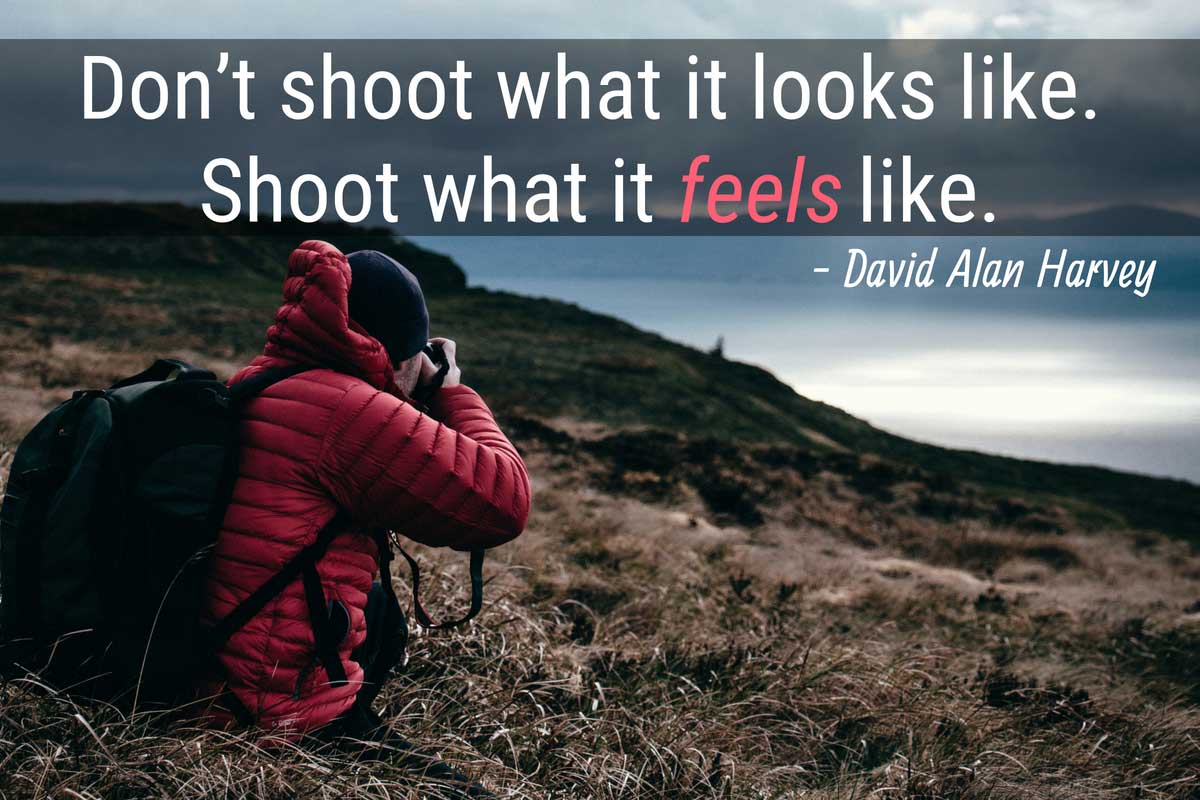 81. “The camera has always been a guide, and it’s allowed me to see things and focus on things that maybe an average person wouldn’t even notice.” ― Don Chadwick

82. “Be daring, be different, be impractical, be anything that will assert integrity of purpose and imaginative vision against the play-it-safers, the creatures of the
commonplace, the slaves of the ordinary.” ― Cecil Beaton

83. “A good snapshot stops a moment from running away.” ― Eudora Welty

84. “If you have something to say with a camera then show it, otherwise it’s better to bake a cake.” ― Jason Eskenazi

88. “Photography is an immediate reaction, drawing is a meditation.” ― Henri Cartier-Bresson 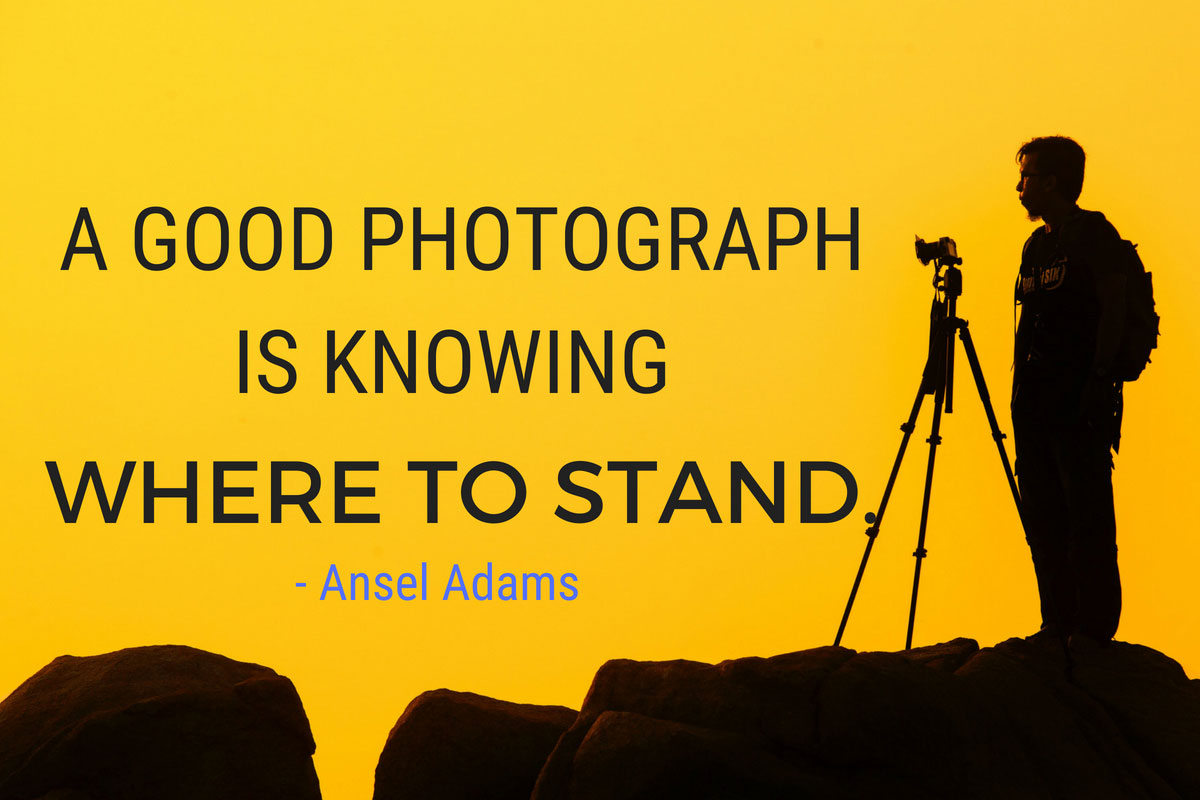 90. “If you are out there shooting, things will happen for you. If you’re not out there, you’ll only hear about it.” ― Jay Maisel

91. “Be yourself. I much prefer seeing something, even it is clumsy, that doesn’t look like somebody else’s work.” ― William Klein

93. “Since I’m inarticulate, I express myself with images.” ― Helen Levitt

94. “You know, I really don’t think you learn from teachers. You learn from work. I think what you learn, really, is how to be- you have to be your own toughest critic, and you only learn that from work, from seeing work.” ― Garry Winogrand

95. “In photography there is a reality so subtle that it becomes more real than reality.” ― Alfred Stieglitz

96. “Photography, as we all know, is not real at all. It is an illusion of reality with which we create our own private world.” ― Arnold Newman

97. “Beauty can be seen in all things, seeing and composing the beauty is what separates the snapshot from the photograph.” ― Matt Hardy 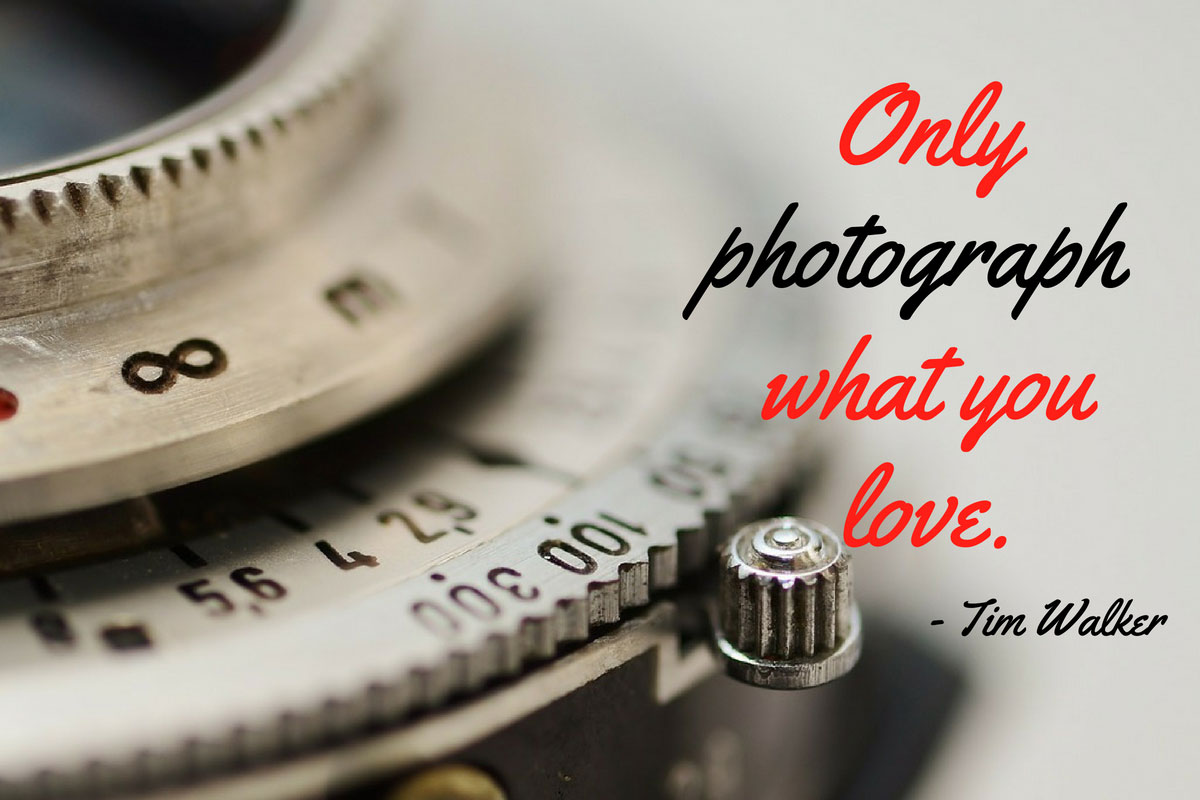 100. “There are no bad pictures; that’s just how your face looks sometimes.” ― Abraham Lincoln

Luisa is a passionately curious Dominican-New Yorker. She is an adventure-seeker who has lived in Spain and Thailand and has traveled through many countries. She has an affinity for all things involving culture, travel and nature and aspires to share her experiences through writing and photography. Follow Luisa on her Instagram. 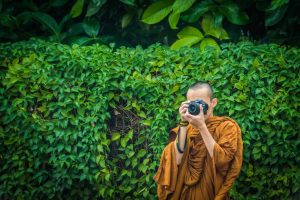 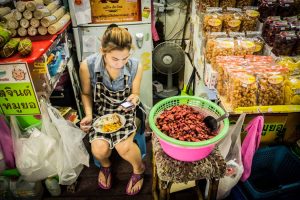 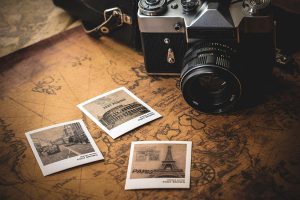 Best Camera for Travel Photography in 2021