10 Things To Do in Beijing, China

Home » Travel Blog » 10 Things To Do in Beijing, China

Heading to China? Read on to find out about 10 best things to do in Beijing.

Beijing city is the capital of the People’s Republic of China. The name Beijing means Northern Capital, and it intended to distinguish the town from Nanjing, which was the Southern Capital.

It is a hustling and bustling capital city, with a population of about 21,5 million people. It is the second largest city by population in the World after Shanghai. It is the nation’s cultural, educational and political center.

The Beijing Capital International Airport is the second busiest in the World since 2010. The subway system of the city is the longest and second busiest after the subway of Shanghai.

The city has a 3000 years old history. Beijing was the home of the Emperor for the last eight centuries until chairman Mao took over control. It was the empirical capital surrounded by the massive Great Wall of China.

Today, China is still communist. However, it is capitalistic Communism. Beijing is a fascinating city with some of the most famous landmarks of the Chinese history. It has 7 UNESCO World Heritage Sites. There are plenty of sites to see for a week long visit to Beijing.

10 best Things to do in Beijing

1. The Great Wall of China

The Great Wall is the most famous site in China, and it is one of the Seven Modern Wonders of the World. It is a 21,196 km long wall surrounding Beijing. The wall was started to be built around 7th century BCE. The majority of the existing wall was built during the Ming Dynasty (14th-17th century).

The best way to see the wall is by joining a tour or going privately. I saw the Chinese Great Wall two times, and I was always astonished by the size and length of it. Last time we visited the Badaling stretch, where we saw a few bears near the entrance, and we also took the cable car to see the wall from above.

This part of the wall is the most famous part of the Great Wall. It was a great experience to hike up and down on the hilly walls and observe the surrounding environment around us.

Every Communist Country has a giant square in the middle of the city, where big speeches by the commander are held, and big marches take place to honor the communist leader. The square was initially built in 1651, but it was enlarged four times its original size during the leadership of Chairman Mao.

It is one of the largest squares in the World being 500 meters wide and 880 meters long. On the square, visitors can see the Monument to the People’s Heroes, the Great Hall of the People, the National Museum of China, and the Mausoleum of Mao Zedong.

You should start your Beijing sightseeing on the Tiananmen Square, as this is the center of the city.

One of the main tourist attractions in Beijing is the Forbidden City. Forbidden City was the home of the Emperor between 1420 and 1912. The palace consists of 980 buildings, and it is a UNESCO World Heritage Site today.

Chairman Mao’s large photo greets everyone at the entrance of the Forbidden City. Here you can see beautiful, well-decorated palaces of the Emperor and his household. Today it is the home of the Palace Museum. The Palace Museum is the most visited art museum in the World.

You can even dress up in a traditional outfit and take pictures of yourself in the palace. The palace is a fascinating place to visit. It is one of the best Beijing tourist attractions that everyone must see, who visits the Chinese capital.

One of the top things to do in Beijing is to visit the Temple of Heaven in the South-Eastern part of the city. Here emperors came to worship heaven in the hope of good harvest.

It’s a beautifully decorated temple complex, which is one of the most beautiful places to visit in Beijing. The temple was named to be a UNESCO World Heritage Site since 1998, and it is described as a masterpiece of landscape design and architecture.

An extensive park surrounds the temple complex, where the locals gather to play games and pass their spare time.

5. Tea Tasting in the Hutong Area

If you are wondering what to do in Beijing after a day of sightseeing, check out the Hutong area, where you will find many cool local shops, and you will be able to see how some Chinese people live in Beijing.

Here the locals live in small, garage like rooms, where they usually have a shower, but no toilet. Tenants of the hutongs use the public toilets on the street. These days, the Chinese government are trying to control the population growth and started destroying the hutongs, so that people are forced to move back to the countryside.

Extra tip: If you are wondering what to see in Beijing at night, head down to the Hutong area and check out its vibrant cafes and bars after sunset.

I visited a Traditional Chinese Hospital two times during my week long visit to Bejing and enjoyed getting a foot bath and acupuncture to cure some of my health issues.

After having a heat map to detect irregularities in my body, acupuncture and acupressure were performed to eliminate some of my problems. I ended up leaving the hospital with two bags of herbs for tea and foot bath.

I visited a private TCM Clinic which is one of the best clinics for acupuncture in the country. You can find it at: Beijing Dacheng TCM Acupuncture
2 Floor Qingqing Plaza,
No. 1 Building, No 39 Yunada Road, Haidian District, Beijing
email: [email protected]

One of the best things to see in Beijing is the Summer Palace that dates back to 1153. It is about 15,5 km outside of Beijing.

It is very relaxing to spend time in the garden and walk around the lakes, the garden, and the palaces. I enjoyed strolling around this beautiful garden for an afternoon. It is one of the best Beijing things to do to visit the Summer Palace.

Three-quarters of the area is covered with water. It is a UNESCO World Heritage Site since 1998, and it was declared “a masterpiece of Chinese landscape garden design.

The natural landscape of hills and open water is combined with artificial features such as pavilions, halls, palaces, temples, and bridges to form a harmonious ensemble of outstanding aesthetic value.”

The Peking Duck is the most famous specialty of Beijing, and it has been prepared since the imperial era. The chef serves thinly sliced duck and crispy skin at the guests’ table.

The dish is served with small pancakes, veggies and hoisin sauce. It is a tasty dish and a must try when you visit Beijing. By the mid 20th century Peking Duck was a favored dish of tourists and diplomats.

The dish became the favorite of Harry Kissinger, the Secretary of State of the United States during his first visit to the China in 1971. Peking Duck was also favored by Fidel Castro and Helmut Kohl.

9. Shop at the Fake Markets

One of the highlights of my Beijing travel was a visit to the fake markets. Here you can buy anything and everything you can imagine. You can buy beautiful Chinese souvenirs, porcelains, clothes, counterfeit bags, electronics.

The market has many floors, and you can find something for everyone here at relatively low prices. The only bad thing about the market is that you have to bargain very hard.

Sometimes the prices start high, and you have to keep on bargaining until you think you reached a reasonable price. Also, the vendors will try to convince you to buy things all the time. They don’t take No for an answer, so it ‘s hard to walk away when you don’t want to buy.

The Olympic Park is on the outskirts of Beijing with many futuristic buildings and modern stadiums. The Beijing National Stadium was constructed for the game. It is also called as the birds nest, and it can host 91,000 people. 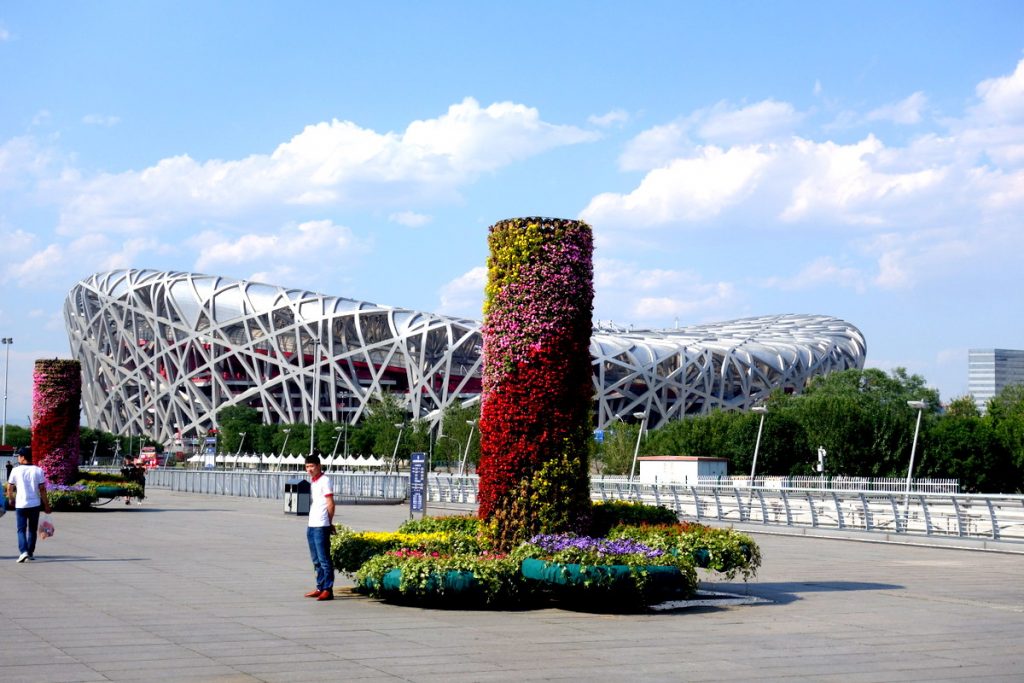 It was the site of the opening and the ending ceremony for the games. Here you can also visit the Beijing National Aquatics Center. Here you can take a photo with the Olympic mascots and walk around and explore some of the coolest architectural creations. It is one of the best Beijing points of interest.

Beijing is a great city that has a lot to offer to its visitors. You will surely enjoy this diverse, fun city, whether you come here for cultural exposure, history, healing or shopping. Make sure to spend more than just a few days in the Chinese capital to be able to visit all the famous sites above to get a proper Beijing experience.

Barbara is a London based luxury travel and lifestyle blogger of Jet-Settera. She left Hungary when she was 17 to conquer the World as a model. Ever since she has lived in seven countries and visited 74. She blogs about exclusive destinations, prestigious film festivals, fashion weeks, yacht parties, and travels across Asia, South-America and Europe. Find her on Facebook, Instagram, Twitter and Pinterest